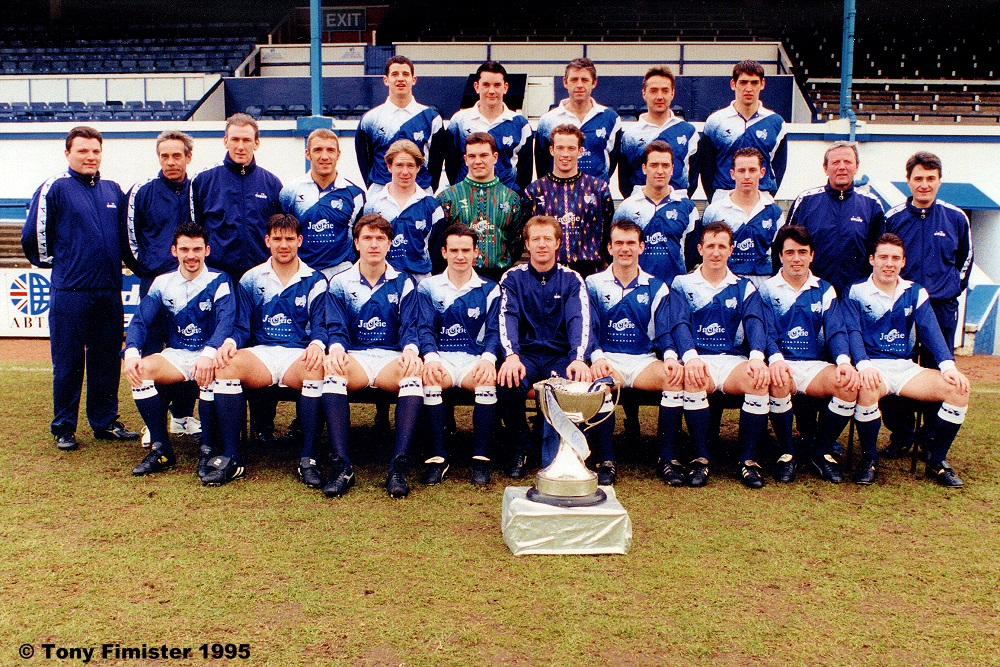 Shown below are a few comments from some of David's ex-team-mates and gaffer from Raith, including some memories they have of his time there and wishing him well for his 60th birthday (12/06/16).

Great feeling that you've reached the big 60 before me although I'm sure youï¿½re in better nick than me. David you were undoubtedly one of the best signings I ever made. Your experience that you brought to the rivers was a massive contribution to the success we had during your time there. We both played our last game against Hamilton at Partick Thistle's ground which ended in a draw to clinch promotion. Great player great pro and more importantly great man. Enjoy your day/night. Jimmy Nick.

Just to say it was a pleasure to be involved with him at various stages of my career. As a young lad at Tannadice and later during his Indian Summer at Raith.

There's not many who could produce at nearly 40! Enjoy your 60th, take care . Phantom

I only played one season with David but his vast experience and knowledge and his willingness to share it with me and other young players during training and games was fantastic.

He was a great professional and at 38 still the best player at the club that season!

Despite all that he has achieved he has no ego and his comings and goings to and from the League Cup semi-final and final that season sum him up really!

The team had food and sleep in a Perthshire Country Hotel on the day of the semi-final v Airdrie at McDiarmid Park, all the boys were buzzing and down in hotel foyer mucking about as usual. As soon as the bus arrived to get us we all pile on and the bus heads off and about 1 mile from Perth we realize Dave (and Ian Redford) were so relaxed about the game they were still sleeping in the hotel when we left!

The hotel chef ended up dropping him off at the park!

Then after his Man of the Match performance in the historic final win over Celtic everyone couldn't wait to get back to Kirkcaldy to celebrate, but David being the consummate professional just headed back to Dundee for presumably an early night!

David Narey was one of my heroes as a boy. Growing up, although my dad played for Dundee I supported United. Watching him stroll through games was a joy.

When he arrived at Raith in 1994 he was obviously coming to the end of his career but I was absolutely buzzing to share a dressing room with him.

He was the ultimate professional, he could have been forgiven for coming to the Rovers and just seeing things out but he trained and played to an incredible level every day every week.

It was an honour and a pleasure to play with him and also his attitude towards us younger boys who thought we knew it yet knew nothing was different class.

I was just a young boy at the time David joined us and we were all star struck in the dressing room! We grew up watching him playing for Scotland and to train, play and learn from him was great.

Also how down to earth, quiet and humble he was after everything he had done in the game was fantastic. His performance in the Cup Final will never be forgotten. I'm guessing he'd be 40? and never really put a foot wrong against younger fitter boys.

I know he's not keen on being the centre of attention but hope he enjoys the day and I wish him all the best.

He came to Raith because he thought he had another year left in him to play. Didn't do much or say much.

Remember our dressing room was full of younger players. Full of carry on and mischief. But when Sash came in, serious.

We go to training and he'd do 3 laps o Starks. That's it 3 laps and off. Played with Frank Sauze at Hibs (80 caps for France, European Cup and UEFA Cup Winner too), but David was better. He won the League, the Cup and we never saw him again lol.

Sash was an exceptional professional footballer who was brilliant to play with for his experience and knowledge of the game.

We had a lot of young lads in the team and he just took all the pressure off everyone around him with his calm nature, his reading of the game and his encouragement.

An absolute gentlemen on and off the pitch. Happy 60th mate have a great day. Hope to see you soon. Woofer

He arrived at Raith Rovers at the best time in their history. At first we had the usual introductions and so training began. Davie as expected would work hard in training and then back to the ground, shower and off he went home.

A few days in and Davie would usually be part of my group to take it in turns when required to take our turn taking our car to training. During the journey we would chat away about anything and everything. Davie was a very funny and at the same time, knowledgeable guy.

When the first team games started coming through, Davie proved himself again and again, and quickly used his experience to install his presence amongst the lads. There wasn't one person in the team that didn't listen to him and respect Davie.

I think I got the closest to Davie during that wonderful season, and loved listening to his stories and experiences of life.

Obviously when we won the Coca Cola League Cup in November, was probably the highlight of the season and finished off winning the League on the last game of the season in Glasgow at Firhill.

I still look fondly at a photograph of Davie and myself holding the League trophy together. After that day, that was it, Davie went home while the rest of the lads went away to celebrate.

That never bothered me as that was his way and maybe I thought, he had already done it many times with Dundee United and Scotland. Davie had seen it and done it and still at the end of his career was winning trophies.

I am not sure if Davie ever dreamed he would come to Raith Rovers for one last season and be so successful.

The last time I saw David was the Hall of Fame in Kirkcaldy about three years ago (2013). It was fantastic seeing him, and didn't look anything different than when we played that last game together in. He was on good form during that evening at the Adam Smith theatre and we had a few laughs backstage before being introduced onto the stage.

Same again, Davie soon left while the rest of us carried on having several more drinks until late into the next day.

All I can say about Davie Narey, is that he is a fine man who has never changed even though he is a Scottish living legend and I wish the man a happy Birthday and long may we be able to look back at that time and smile, laugh and admire that one amazing season.

If I ever get around to finishing my memoirs or book, there will be a very long chapter of the Raith Rovers story and a big part of that chapter will have a lot to do with Davie Narey.

All the very best mate and hope to see you again one day soon. Hopefully I get a drink out of you! Don't forget, I am from Yorkshire.